Gnocchi is incredibly easy to make, a lot easier to make than fresh pasta for instance and it’s so comforting, whether you serve it with a robust wild boar ragout or a light tomato and basil sauce (as I did in this instance).

It also cooks in less than 2 minutes and apart from the baked potato (more of that later), you can whip up a batch and have it on the table in under 30 minutes.

Loving the concept of a light little potato dumpling, and because I didn’t have any Italian flour, I used cake flour and it works very well indeed.

Another great plus is that gnocchi freezes beautifully. Arrange the freshly made dumplings in a single layer on flat tray lined with lightly-floured baking parchment. After 3-4 hours, transfer the frozen gnocchi to a plastic bag. Defrost completely in a single layer before cooking.

So go ahead and impress your friends. They probably won’t believe that you weren’t slaving away for hours in which case, share this recipe with them, courtesy of Antonio Carluccio. 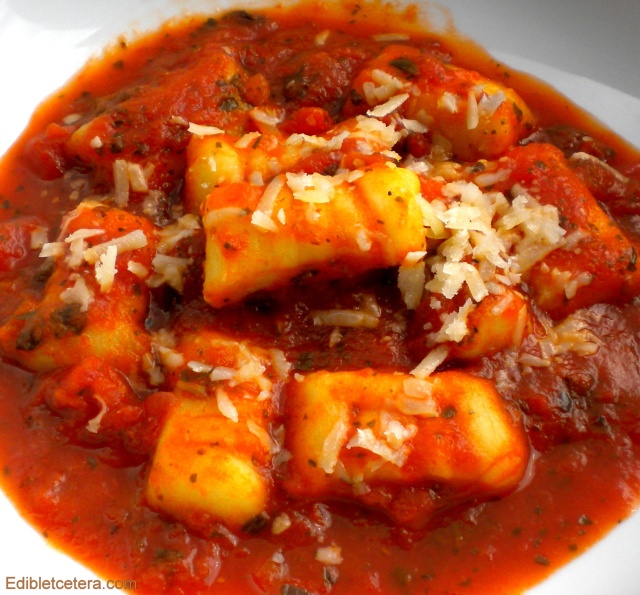 Prick the potatoes with a knife and bake them in a preheated 400F (200C) oven for about an hour until soft, then cool until they’re cool enough to handle. Cut then in half and scoop out the potato, discarding the skins or using them for something else.

In a large bowl, mash the cooled potato with a masher (don’t use a blender – it makes the potato heavy). Add the egg and flour and a grind of sea salt and black pepper. Stir everything together then get your hands in there and knead it until you have a nice smooth dough. At some point you’ll find it easier to do this on a lightly floured board.

Take smallish amounts at a time and again on a lightly floured surface, roll the dough with your hands into a long sausage about 3/4 inch (2cm) wide. It only takes a few seconds. Cut them at 3/4 inch (2cm) intervals and using the back of a fork, roll each piece until you have little indentations (they hold the sauce). Set each piece on a lightly floured parchment-lined tray until you’ve made them all this way and are ready to cook.

Bring a lot of salted water to a boil in a large pan – meanwhile start warming your preferred sauce in a separate wide pan over a gentle heat. (Note, if you’re using fresh pesto, just have it in a warmed serving bowl at room temperature and drop the cooked gnocchi onto the pesto and toss thoroughly to coat with sauce).

Once the water is boiling, drop in the gnocchi and lower the heat slightly. After about a minute they’ll float to the surface which means they’re cooked. Transfer them with a slotted spoon to the pan with your warm sauce and serve immediately with lots of freshly grated Parmigiano Reggiano.

I'm passionate about food; I cook, photograph, eat...then writes about it in that order. I'm also an occasional restaurant critic and caterer; a former newspaper columnist; author; social media/marketing communications; world traveler; dog lover; skier...and wit, (according to those who know me).
View all posts by edibletcetera →
This entry was posted in Pasta. Bookmark the permalink.