An announcement; unlike previous years’ posts, I’m no longer writing ‘In Defense of British Food….’ because only the most unworldly reader still imagines that British food is indefensible.

With London considered ‘the restaurant capital of the world’ for many years now  (not my words, Gourmet Magazine’s), I can safely say that eating very well all over Britain has become commonplace, whether it’s in a Michelin-starred restaurant, a charming 250 year old ‘Gastro-Pub’, or both. 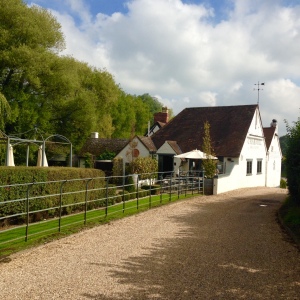 A favorite Gastro-Pub, The Crabmill at Preston Bagot

I’d like to expound the meaning of ‘Gastro-Pub’ since I was met with a few blank stares when I returned from my most recent trip to Blighty.

True, up until about 25 years ago, British pubs weren’t famous for their cuisine unless your idea of dinner was a packet of crisps, a pickled egg or two and perhaps a pickled onion, all washed down with a warm pint of bitter (ale). Also true is that some pubs back then did offer meat pie and chips that were nuked to a sad and soggy end but that was about it.

Nowadays  many pubs and country inns have been adapted and partly converted into restaurants, serving  delicious, locally-sourced and creatively prepared food. They still maintain an inviting pubby atmosphere but the whole experience has now been elevated to satisfy even the snootiest gastronome, hence the name ‘Gastro-Pub’. 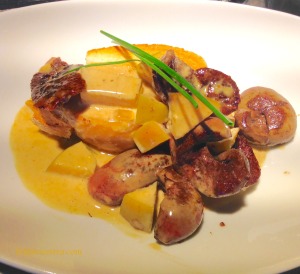 I didn’t visit London this time – I hovered around the North Cotswolds and Yorkshire instead. I’ve written about The Crabmill in Preston Bagot before and it’s become one of my favorite places to eat. Scrubbed oak tables, a real log fire (when it’s cold outside), antique furniture, silver candelabras, vases of lilies, low beams and a flagstone floor, worn smooth over the centuries – and a big plus as far as I’m concerned is that they’re dog friendly – and last but not least, the food is consistently good.

Being a typical carnivorous Brit, I’ve always had a great fondness for offal and the thought of steak and kidney pud steaming on a plate makes me feel rather wistful. However, all wistfulness evaporated when I saw that lamb kidneys featured on the reasonably-priced prix-fixe menu (two courses including wine or beer for £14.95). Pan-fried kidneys with apple, hard cider and a mustard cream sauce, perched on a chunk of toasted brioche, was an impossibly delicious appetizer. 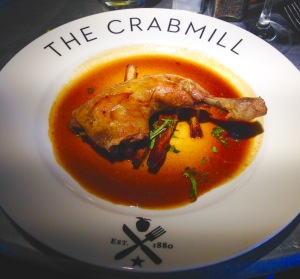 The confit of free range chicken leg with truffle-roasted parsley root and a tarragon jus that followed was also excellent, although the kidneys got my top vote.

My fellow-diner’s cous-cous with apricot, chili and broccoli salad was unusually good, as were the curried mussels – but the puds were a bit routine; comforting sticky toffee pudding was certainly OK but I’ve had gooey-er.

The Crabmill is part of the ‘LovelyPubs.CO.UK’ group and quite rightly so. I can’t imagine visiting the UK without eating at The Crabmill and whereas it’s really pretty in summer with a charming garden complete with blackberry bushes bursting with fruit, I do recommend going when it’s chilly outside, and grabbing a table near the log fire.

Another favorite dog-friendly inn  is The Bell at Alderminster, an award winning Gastro-Pub and part of the beautiful Alscot Estate  – and The Bell is as charming and inviting as any old country inn could be. 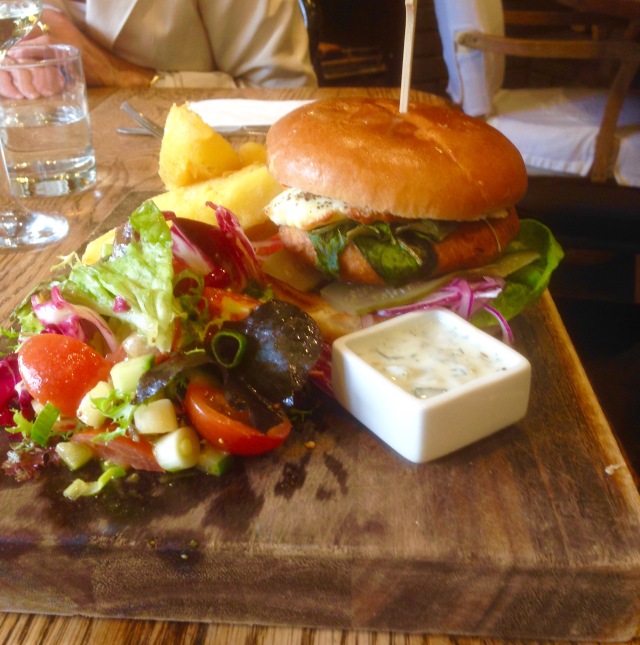 Vegetarian Burger at The Bell, Alderminster 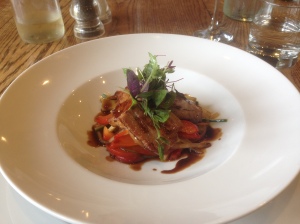 Crisp Pork Belly over Asian Slaw at The Bell, Alderminster

You could stay at The Bell if you wanted to and the menu is superb, with the same price point as The Crabmill.

Sandwiches are massive, drool-worthy  and packed with fresh local produce but I opted for something else I can’t get over here much – crispy pork belly over Asian slaw. It was mouthwatering and the linguini with butternut squash, chestnut mushrooms and borlotti beans was unexpectedly comforting and rich.

Needless to say, the flourless chocolate cake was perfect. 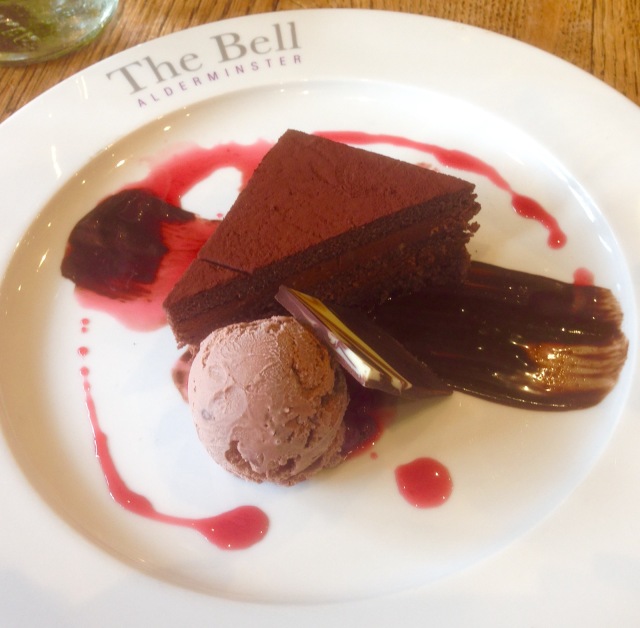 In no particular eating order,  the gastronomic highlight of my visit to Leeds was at the award-winning Kerala Indian Restaurant Tharavadu, right in the heart of the city.

Reservations are necessary and its a good job we had one as there were quite a few people trying to wheedle their way in and failing miserably.  The acoustics weren’t great and the noise level was off the charts to the point that we asked to be moved to a quieter corner table.

However, once the food arrived the marginally diminished din was forgotten. This was possibly one of the best Indian meals I’ve ever eaten – and I’ve been eating Indian food all my life.

The spicy soup with tiny little brown shrimp was so utterly fragrant that I would have ordered it again had it not been the starter part of the ‘Sadhya Thali’ that I’d ordered…a huge platter of assorted delicacies.

Honestly, if you love Indian food, it’s worth traveling to Leeds just for this. Memorable and  well-priced. Even the wine was decent! 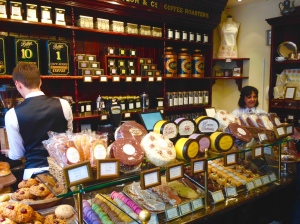 The shop at the entrance to Bettys Tea Room, York

No visit to Yorkshire is complete in my opinion, without a visit to one of Bettys Tea Rooms, as pure Yorkshire as Yorkshire Pudding itself.  ‘Lady Betty’ has proclaimed her tea rooms to be the place for  ‘The quintessential afternoon tea – an experience to treasure’ and so it is.

There are now two Bettys Tea Rooms in the historic city of York which makes sense as there’s always been a queue (line) for a table that goes halfway around the building, come rain or shine.

I always feel slightly guilty (only slightly) knowing that once seated, my conscience should dictate that I eat and drink up quickly, thus giving another desperate afternoon-tea-hog a shot at a table.  However, my appetite usually overcomes my conscience and the desperadoes were all but forgotten with the arrival of the most perfect ‘afternoon cream tea’, consisting of warm, fluffy raisin-studded scones, home-made strawberry jam and of course a dish of  the thickest, richest, yellowest clotted cream, ever. Oh and not forgetting the perfect pot of British tea to wash it all down with.

Sadly, tea just doesn’t taste the same over here, even though I bring UK tea bags back with me. I’ve decided it must be something to do with the water. 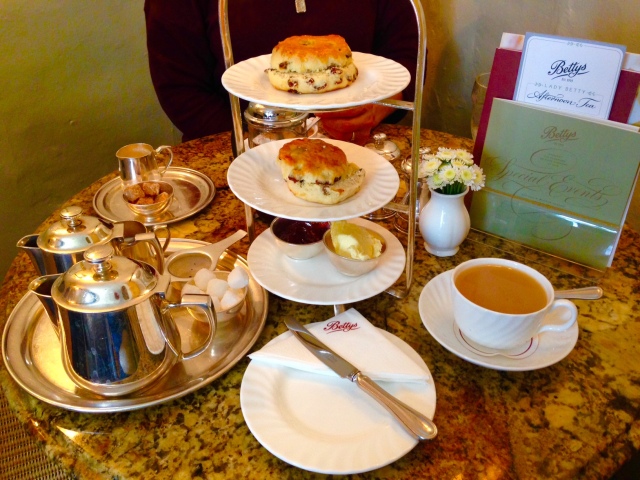 An afternoon Cream Tea at Bettys in York 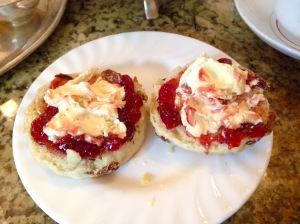 Personally, I couldn’t care less; just give me lots of clotted cream and strawberry jam and I’ll happily experiment with both options all afternoon. 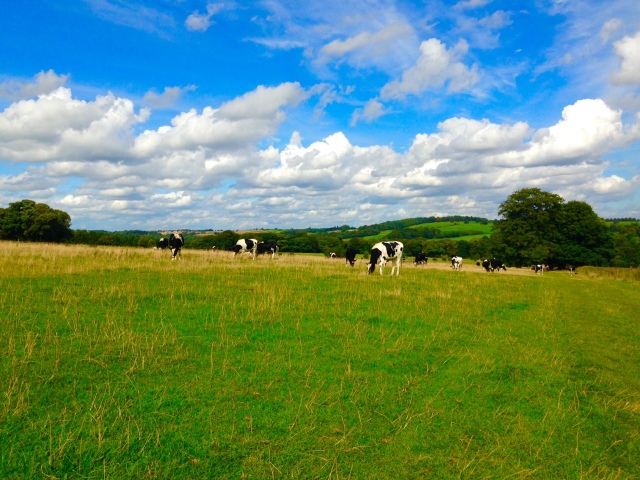 I'm passionate about food; I cook, photograph, eat...then writes about it in that order. I'm also an occasional restaurant critic and caterer; a former newspaper columnist; author; social media/marketing communications; world traveler; dog lover; skier...and wit, (according to those who know me).
View all posts by edibletcetera →
This entry was posted in Food & Travel. Bookmark the permalink.