Posted on October 3, 2015 by edibletcetera

I have friends in Colorado who hunt big game; elk to be precise and elk are rather large. For instance, if you were to hit an elk while driving, your vehicle and very probably yourself, could be written off.

Over the past 20 years I’ve been turning my nose up at the generally un-gamey flavor of US wild game; pheasant that tastes like chicken, venison tasting like nothing in particular, and so-on. British game is SO gamey and I really miss it.

So imagine my delight and amazement when thanks to a couple’s unexpected generosity, I was presented with four elk tenderloin steaks, weighing about 6-8 ounces each.

They already had a good amount of coarse black pepper pressed into the meat and were arranged on a plate, surrounding several pieces of uncooked smoked bacon.

This yielded the most tender, deliciously gamey result. Still slightly pink in the middle (the way I like it), I sliced the tenderloin very thinly with my sharpest kitchen blade.

My dog was doing frantic somersaults in anticipation of the well-done end pieces. She now turns her nose up at anything else.

Consequently – and because elk is rather rich/strong-tasting, I’ve been eating small amounts of thinly sliced elk on top of a salad, all week.

It would also have been fabulous served right away with some wild mushroom-infused, buttery mashed potatoes and perhaps some Brussels sprouts, tossed together with a few French chestnuts.

Because I was going to eat it cold, I bought some good British Stilton cheese and along with the huge, ripe home-grown tomatoes that were presented along with the elk – I must say that this turned out to be the nicest US game-topped salad I’ve ever eaten. 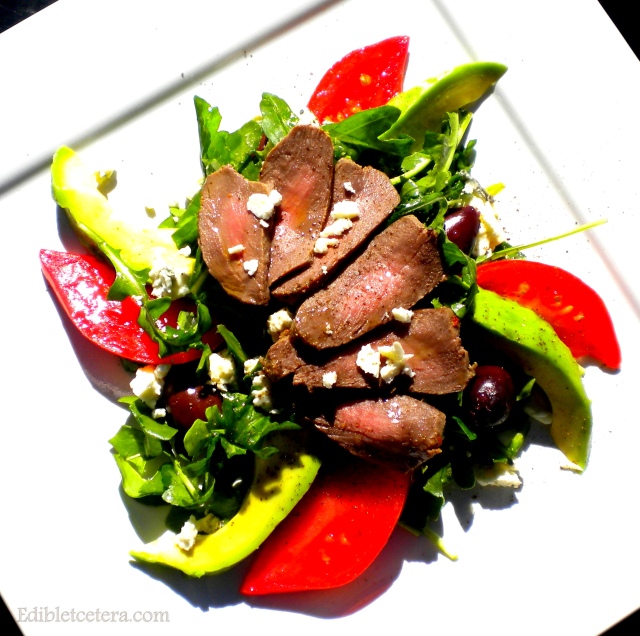 A couple of rashers of (streaky) smoked bacon

A dozen or so pitted Kalamata olives, rinsed and drained 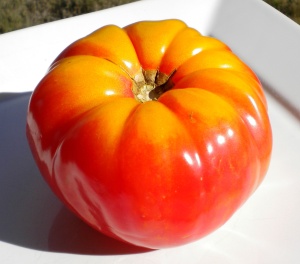 Slices of ripe tomato and avocado, quantity based upon how much you like them

Champagne vinegar (any good quality wine or sherry vinegar will do)

Heat a heavy-based skillet or saute pan and when hot, drop in the bacon rashers and cook them until crisp, rendering the fat. Remove the bacon and use it for something else, eat it there and then, or give it to the dog.

Place the tenderloin in the hot bacon fat and give it 3 minutes each side depending on how rare you want it (this yields ‘medium’). After 6 minutes, transfer it to a cutting board, tent with foil and let it rest for about 5 minutes.

Meanwhile, in a large bowl, toss the arugula (rocket) leaves in a little extra virgin olive oil and a splash of champagne vinegar.

Slice the tenderloin very thinly with a very sharp knife.

Arrange the arugula and remaining salad ingredients on individual plates, finishing with the crumbled Stilton and sliced tenderloin.

Note* – the cooked tenderloin has lasted at 5 days so far, well covered in the fridge but then I did start with rather a lot. I just slice it as I need it.

I'm passionate about food; I cook, photograph, eat...then writes about it in that order. I'm also an occasional restaurant critic and caterer; a former newspaper columnist; author; social media/marketing communications; world traveler; dog lover; skier...and wit, (according to those who know me).
View all posts by edibletcetera →
This entry was posted in Made in Under 30 mins, Meat, Salads & Appetizers. Bookmark the permalink.