Or in other words, spaghetti with fresh cherry tomatoes, basil, garlic and lots of really good olive oil.

On a friend’s recommendation I found some edamame spaghetti in Costco so bought rather a lot as I was impressed by its high protein, fiber and potassium content, plus I love anything organic. It was a bit of a risk as I’d never tasted it so I wasn’t too surprised to find it had a faint whiff of hay-bale when I opened the packet.

However, it cooked very quickly (3-4 minutes) and following the instructions, I rinsed it immediately in cold water which resulted in a very nice al-dente texture; much nicer in fact than many of those other GF types of pasta that can be quite revolting.

Now faced with a bowl of cooked, cold edamame spaghetti that tasted and smelled a bit un-pasta-like, I decided to smother it with some bright and robust summer flavors; fresh basil, fresh tomatoes and garlic, with lots of extra-virgin olive oil. Pure and simple.

The sauce is raw (‘crudo’), absolutely wonderful and is definitely one for garlic lovers. You can cut back on the garlic but it’s essential so don’t leave it out entirely.

You can make this with regular pasta which will extend your total cooking time to a whopping 11 minutes or so. Once assembled,  I recommend allowing it to sit a room temp for about an hour, allowing the flavors to develop.

Warm crusty bread is the only other thing you’ll need, and of course a nice little chianti – so here you are, summer in a bowl from someone who is now totally hooked on edamame spaghetti! 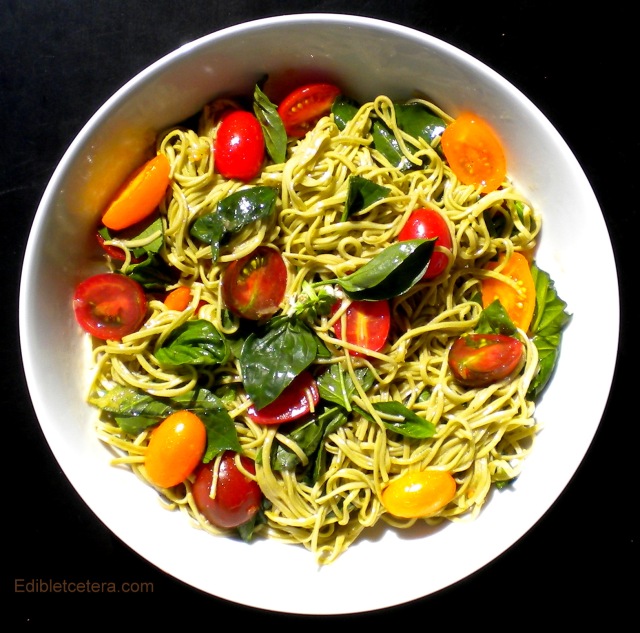 A 2/3 oz (19g) packet of fresh basil or the equivalent amount from your own garden, leaves roughly torn

One or 2 fat cloves of garlic, peeled and coarsely chopped

Half a teaspoon of coarse salt

About 1/3 – 1/2 cup of the very best cold pressed, extra-virgin olive oil that money can buy

Using a pestle and mortar, pound the garlic with half a teaspoon of salt until you have a creamy emulsion. Whisk that into the olive oil then pour this over the tomatoes and basil in a smallish bowl.

In a large bowl, tip the sauce onto the cooked pasta and give it a generous grind of black pepper. Toss everything together until it’s well combined, then let it sit for about and hour or so at room temperature.

I'm passionate about food; I cook, photograph, eat...then writes about it in that order. I'm also an occasional restaurant critic and caterer; a former newspaper columnist; author; social media/marketing communications; world traveler; dog lover; skier...and wit, (according to those who know me).
View all posts by edibletcetera →
This entry was posted in Pasta, Vegan, Vegetables / Vegetarian. Bookmark the permalink.