To the uninitiated, a salad made with kale might sound about as appetizing as a cod liver oil and vinegar dressing; healthy but unpleasant.

However, kale salad is unusually delicious and tastes even better the following day and into the next – it’s become my favorite salad and it transitions really well from winter into summer.

I ate some the other night in a restaurant and decided that I could improve upon it. You can play around with different ingredients and make your own version; here’s mine…followed by a recipe for KALE CRISPS; a great way to get kids (including significant others) to eat their greens and they’re a wonderful healthy snack that won’t stick around for long one you’ve offered them up.

Notes at the end. 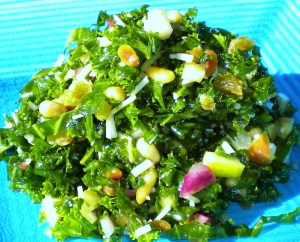 1 bunch of kale; stalk and any tough ribs cut out and discarded

After trimming the tough parts away, wash and thoroughly dry the kale; stack it and roll up tightly then slice across very thinly to create fine shreds (aka ‘chiffonade’) – put the shredded kale in a large bowl with the sea salt.

With your fingers, massage the kale and salt together for a full 2 minutes.

Transfer kale to a serving bowl leaving any liquid behind.

Whisk together the olive oil, lemon juice and honey and add this to the kale along with everything else except the cheese… give it a good toss around.

Let it sit at room temp for 20 mins then adjust the lemon juice, olive oil and honey to taste; finally add the cheese.

Give it all a good final toss – chill for 1 hour to 2 days (covered) and serve.

Experiment with different ingredients such as dried currants or cranberries instead of golden raisins; ripe pear instead of apple; diced Gorgonzola instead of Parmigiano-Reggiano and chopped caramelized walnuts instead of toasted pine nuts – crumbled feta cheese and chopped black olives makes more of a Greek kale salad.

Now for the more-ish snack…..

You wouldn’t think its possible to want to scarf down a whole bunch of kale in a few minutes but when you bake kale in the oven with olive oil and sea salt, you get a light-as-air, green, crispy treat that’s an addictive and healthy alternative to potato or corn chips:

Toss with the olive oil and make sure every piece is coated with oil, then add the sea salt and toss again.

Spread on the baking sheet and bake for 10 mins or until the edges have turned a light brown. Remove from the oven and serve.

As they’re feathery-light, any slight breeze will send them flying all over the place so serve them away from drafts…half of mine blew away when I took the picture!

I'm passionate about food; I cook, photograph, eat...then writes about it in that order. I'm also an occasional restaurant critic and caterer; a former newspaper columnist; author; social media/marketing communications; world traveler; dog lover; skier...and wit, (according to those who know me).
View all posts by edibletcetera →
This entry was posted in Salads & Appetizers. Bookmark the permalink.