A fabulous pizza where the sweetness of dried figs and caramelized shallots complements the smooth, tangy unctuousness of the Gorgonzola. The only thing that takes a bit of time to prepare are the onions and they can be made in advance and kept in the fridge or frozen for several months.

Other than that, you can whip this up in under 30 minutes, especially if you buy a raw ready-made pizza crust.

I make a batch of caramelized shallots/onions a couple of times a year and store them in small containers in the freezer. Defrosted and gently re-heated, they make a perfect topping for steak, burgers, grilled salmon; beaten into mashed potatoes, folded into an omelet or used as a topping for bruschetta. Caramelized onions (onion jam) takes approximately 45 mins to 1 hr, although the actual prep time is about 5 mins.

Non-vegetarians can add shredded prosciutto for an even more decadent pizza. 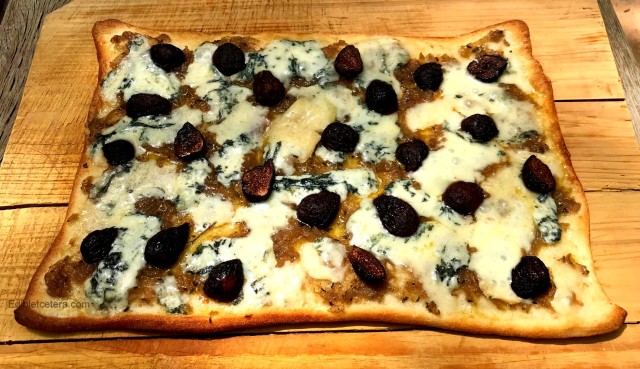 (Serves two hungry people or 6 as an appetizer snack)

For the caramelized onion that can be made ahead –

A sprig of fresh thyme

*A raw pizza crust, approx 12ins across (I used a ready-made thin raw crust…don’t feel guilty using shortcuts like this when you have such fabulous toppings)

6 oz (170g) of Gorgonzola diced or sliced – however you prefer

Starting with the shallots/onion, slice them very thinly across in rings then sauté over low heat in the warmed olive oil and melted butter, until soft and translucent; approx 5 mins.

Add the honey and vinegar – season to taste with salt and pepper. Throw in the thyme sprig and cover with a tight fitting lid (or use heavy duty foil if you don’t have one). Cook on a very, very low heat for about 45 mins to an hour, stirring occasionally. If they look a bit dry along the way, add a tablespoon of water. Once they’ve become glossy, jammy and meltingly tender, crank up the heat to rapidly boil off any residual liquid. Remove the thyme stalk and set the onions aside to cool (once cooled you can freeze them or store in the fridge for a week).

For the crust ( in my case, made by someone else) – pre-heat the oven to 400F /200C. Arrange the raw crust on a baking sheet, brush lightly with olive oil and bake for 5 mins (can be done ahead).

Pile on the toppings and finish with a drizzle of olive oil. Bake until the cheese is bubbling and the edges of the crust are golden, approx 10-12 mins.

The toppings’ quantities are only meant as a guide. Use more or less, at will.

Fresh figs, mozzarella and caramelized onions make a lovely, milder-tasting alternative if fresh figs are in season (which isn’t often in Colorado). Simply snip the stalks off and split them lengthwise into 3 slices per fig as they’re much larger than dried ones. Buffalo mozzarella is best if you can get it.

You can also use figs of the calimyrna variety but they won’t be as darkly dramatic as black mission figs.

I'm passionate about food; I cook, photograph, eat...then writes about it in that order. I'm also an occasional restaurant critic and caterer; a former newspaper columnist; author; social media/marketing communications; world traveler; dog lover; skier...and wit, (according to those who know me).
View all posts by edibletcetera →
This entry was posted in Made in Under 30 mins, Pasta, Vegetables / Vegetarian. Bookmark the permalink.