Posted on December 10, 2017 by edibletcetera

Chock full of smoky andouille sausage, potatoes, kidney beans and kale, this soup is hearty, spicy and rather garlicky – in fact it’s just perfect served piping hot, with lots of crusty bread on a frosty night.

It’s also really simple to make if you’re able open a can of kidney beans, a packet of baby kale and a couple of cartons of organic chicken broth. Ready in under 30 minutes, it’s a great go-to soup when you’re in a rush. Having said that, I like to make it ahead and let it sit for a couple of hours because like most soups, the flavors improve with a bit of time.

I used all-natural Wellshire Smoked Andouille Sausages but any good andouille sausage will do and if you cant find them, try chorizo or polish keilbasa.

If you can’t handle this amount of smoke and garlic, here’s a delicious Tuscan Kale & White Bean Soup recipe that may seem similar on the face of it but the end result tastes entirely different. 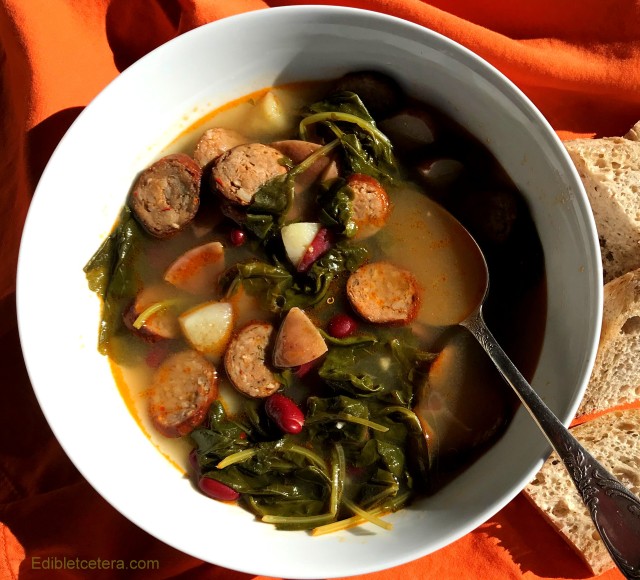 In a large heavy pan, cook the sausage until the slices are browned and they’ve released at least 2 tablespoons of oil. Transfer the sausage to a bowl using a slotted spoon and set aside.

In the rendered oil (if you don’t have enough, add a little vegetable oil at this point) sauté the garlic until its golden then add the broth and potatoes and bring it to a boil. Reduce the heat and simmer for 15 minutes.

Add the drained beans and kale and simmer for 5 minutes, followed by the sliced sausage  – cook for another couple of minutes.

Check the seasoning and add salt and a grind of black pepper if you think it needs it.

Last of all,  stir in the sherry vinegar.

I'm passionate about food; I cook, photograph, eat...then writes about it in that order. I'm also an occasional restaurant critic and caterer; a former newspaper columnist; author; social media/marketing communications; world traveler; dog lover; skier...and wit, (according to those who know me).
View all posts by edibletcetera →
This entry was posted in Made in Under 30 mins, Meat, Soups. Bookmark the permalink.

2 Responses to Recipe – A Winter Soup