Recipe – How to Cook Lobster

I’m sure there are many people out there who enjoy fresh lobster but are daunted by the task of cooking it themselves, so when I was invited to my friend’s annual lobster party, this time rather than going for a brisk walk when they got dropped in the pot, I decided to hang around and get instructions.

You hear stories of them scrambling to escape the boiling water but the way she did it put them out of their misery in a nanosecond which made me feel slightly better about it.

When you order lobster in a restaurant, it’s been cleaned, opened up, prettied up and all you need is a small fork. None of that here – this is how to cook and eat a whole lobster and I recommend doing it outside with paper plates, loads of paper napkins and bibs.

You’ll also need nutcrackers, nut picks, plenty of melted butter, corn on the cob, potato salad, etc., as this is a messy, delightful, lobstery feast in traditional Maine style. Plenty of sunshine is also a plus.

I also learned that you can eat every bit with the exception of the shell and feathery gills – the green paste (Tomalley) is particularly delicious!

Note: my friend who hosts her annual event, orders her lobster via ‘Claws for a Cause’ that benefits a really worthy charity, angeleyes.org offering free grievance counseling and support to parents who have lost a child through S.I.D.S. 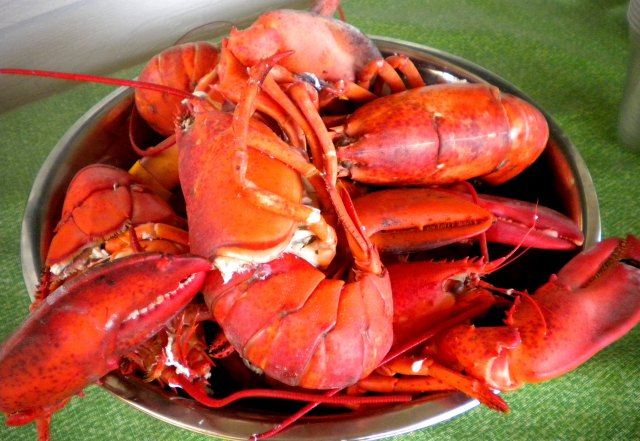 Bring the water to a rapid boil then plunge each lobster into the water headfirst (this kills it instantly). The water will rise, foam up and possibly spill over – a bit messy. You don’t want to skim the foam off. Put the lid on and watch it carefully, taking the lid off a few times to lower the level of foamy water.

Every few minutes and using long tongs, rotate the lobsters so that they all cook evenly.

The lobsters should be cooked after 10-12 minutes – they’ll be bright red and the best way to find out if they’re ready is to gently pull at one of the long feelers which should come away easily.

Transfer the lobsters to a large bowl and once they’re cool enough to handle, get cracking! 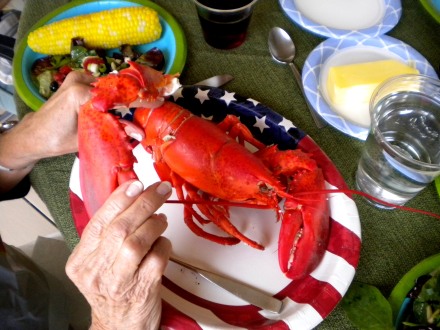 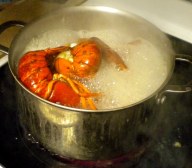 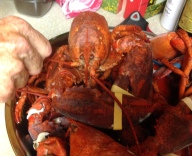 I'm passionate about food; I cook, photograph, eat...then writes about it in that order. I'm also an occasional restaurant critic and caterer; a former newspaper columnist; author; social media/marketing communications; world traveler; dog lover; skier...and wit, (according to those who know me).
View all posts by edibletcetera →
This entry was posted in Fish & Seafood, Made in Under 30 mins. Bookmark the permalink.

2 Responses to Recipe – How to Cook Lobster