Posted on September 5, 2015 by edibletcetera

Let’s start with Paonia. Nestled in a sunny sheltered valley, the town of Paonia is part of the western Colorado region that’s famous for it’s orchards and vineyards, thanks to their temperate climate and rich soil.

Paonia peaches are at their absolute best right now and Colorado peaches are some of the juiciest I’ve ever eaten.

In season they’re less than a dollar a pound, so what better way to glorify them than to poach them in a fragrant syrup and serve over vanilla ice cream with a few spoonfuls of fresh raspberry sauce, topped with a blob of whipped cream and a few toasted almonds. Simple and perfect.

And in case you didn’t know, ‘Peach Melba’ got it’s name because some famous French culinary dude called Auguste Escoffier, created it to honor Dame Nellie Melba (an equally famous Australian Soprano) during the latter part of Queen Victoria’s reign – and it’s every bit as good today as it was back then, which is why it’s considered a classic.

Note – if you have room in your freezer, chill the individual serving dishes before assembling. 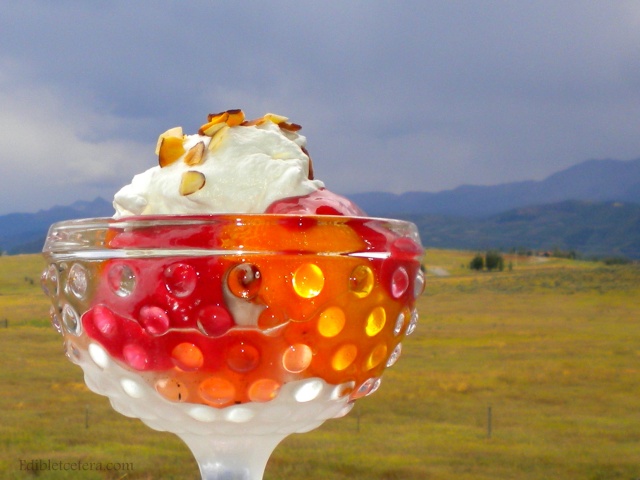 The finely pared zest of 1 lemon (no white pith)

Half a vanilla pod, split lengthwise

For the raspberry sauce:

In a wide saucepan, bring the sugar, water, lemon juice, zest and vanilla bean to a boil. Lower the heat and simmer gently for 5 minutes.

Add the peach halves to the syrup in one layer and poach them until they’re tender (about 3 mins each side depending on their ripeness) – carefully turning them over once. Remove them from the syrup with a slotted spoon and once they’re cool enough to handle, slip their skins off and return them to the syrup to cool completely ( it can be made ahead to this point – once cooled, cover and chill in the fridge).

For the raspberry sauce, combine the raspberries, sugar and lemon juice in a food processor and pulse until you have a puree. Push the sauce through a fine mesh sieve to remove the seeds then set it aside (can also be made ahead and kept covered in the fridge).

To assemble the Peach Melba, start with a good scoop of vanilla ice cream in each serving dish, then remove the peaches (2 halves per person) from the syrup with a slotted spoon and arrange them on top of the ice cream. Follow with raspberry puree then whipped cream and scatter with the toasted almond flakes.

This is very good without the whipped cream but is infinitely better with.

I'm passionate about food; I cook, photograph, eat...then writes about it in that order. I'm also an occasional restaurant critic and caterer; a former newspaper columnist; author; social media/marketing communications; world traveler; dog lover; skier...and wit, (according to those who know me).
View all posts by edibletcetera →
This entry was posted in Desserts. Bookmark the permalink.