Like many Brits, I grew up in a home that had an abundance of rhubarb in the garden; so much so, that when I was a small child, I’d pull off a big a stalk with its massive umbrella-like leaf and use it as a sunshade.

Nowadays I have to pay $5 per lb for it which I rather resent but as there’s not much to beat a good rhubarb pie, I bite the bullet.

Rhubarb also goes brilliantly with fresh strawberries and a touch of orange zest. I wanted to make something a bit different from the usual plain rhubarb pie with a latticed pastry topping and decided that a lovely fluffy meringue would work very well – it does. There’s no need to add cream or ice cream unless you’re a glutton – this lovely summer tart is wonderful on its own.

I’ve included one of my favorite recipes for Pâte Sucrée (sweet pastry crust) that’s best made ahead but if you want to speed things up, buy a ready-made unbaked pie shell and part-bake it according to instructions. It needs to go in the oven twice so don’t overdo it. One of those Graham cracker (digestive biscuit crumb) crusts would also be good here and there’s no need to part-bake it first.

If you’re making you own pastry from scratch you’ll need a food processor, a rolling pin and a loose-based, fluted 9 inch (23cm) tart pan. It’s absolutely worth it for a superior pie crust that really doesn’t take long to make. It also freezes well but chill it for 2 hours first.

An electric whisk will make short work of the meringue part.

Note: for meringue to cook properly, the pie filling needs to be hot when you pile it on. 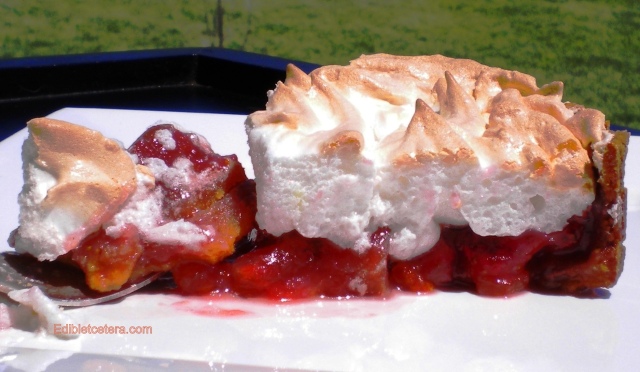 A pinch of sea salt

For the meringue topping: 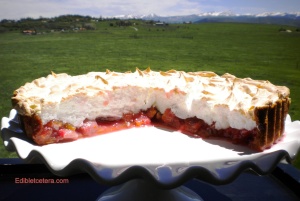 Start by making the pastry at least 2 hrs and up to 24 hrs ahead if you’re making it from scratch, as follows:

In a food processor, briefly pulse the flour, sugar and salt together.

Add the butter pieces and pulse until it has a coarse meal consistency. Add the egg yolk, vanilla and approx 2 ½ tablespoons of water and pulse again until it forms a large clump. If it looks a little too crumbly and dry, add a little more cold water, a teaspoon at a time.

Scoop the dough out and very gently form it into a ball, then flatten it into a disk shape. Wrap it in cling film/plastic wrap and chill in the fridge for at least 2 hours and up to 24.

Roll the dough out on a lightly floured surface until you have a circle approx 14 ins (35cm) across.

Gently drape the pastry around the rolling pin to transfer it to the tart pan. Lightly push the pastry into place without stretching it. Trim the overhang to about ½ in (1cm) and fold the excess inwards, leaving about ¼ in (1/2 cm) above the side of the rim. Prick the crust base all over with a fork, then stick it in the freezer for 15 minutes (prevents shrinkage).

Bake it in the preheated oven for 15 minutes. Remove from the oven and if the sides have collapsed a bit, just push them back into place with a fork. Make the rhubarb and strawberry filling while the pastry is baking.

To cook the fruit, put the rhubarb, sugar, orange zest and juice in a saucepan set over a medium-low heat. Simmer gently, stirring occasionally until the sugar dissolves and the rhubarb is only just tender (about 6-8 minutes). Remove the rhubarb from the liquid with a slotted spoon and set it aside covered, to keep warm.

Crank up the heat and boil the rhubarb liquid until it’s reduced by half. Turn off the heat, add the rhubarb back to the pan then fold in the sliced strawberries. Keep the filling warm until the crust is ready.

For the meringue (while you’re warming the rhubarb through) whisk the egg whites and orange zest until stiff peaks form. Add the sugar one tablespoon at a time and continue to whisk until you have a stiff, glossy, bulk. The sugar needs to be thoroughly whisked in, so don’t be tempted to add more than a tablespoon at a time, or it will separate during cooking.

Pour the hot fruit filling into the tart shell. Pile the meringue on top starting around the edge, making sure that you completely seal the fruit in. Fluff the meringue with a fork to form soft peaks. Put the pie back in the oven for about 10 minutes or until the top is a lovely golden color.

I'm passionate about food; I cook, photograph, eat...then writes about it in that order. I'm also an occasional restaurant critic and caterer; a former newspaper columnist; author; social media/marketing communications; world traveler; dog lover; skier...and wit, (according to those who know me).
View all posts by edibletcetera →
This entry was posted in Desserts. Bookmark the permalink.