In all conscience, I can’t write in defense of the British weather as it’s been abysmal this year – but I can certainly reiterate that the UK has some of the finest dining in the world.

I’d like to share some of my culinary adventures and hopefully enlighten those remaining Americans who still cling to the notion that British cuisine consists of overcooked veg, nasty mystery-meat pies and awful offal. If you haven’t traveled to the UK over the past 20 years, you may be forgiven but even that very American publication Gourmet Food Magazine, seems to agree that London is now the restaurant capital of the world.

And like a stone thrown into a pond, the ripple effect of this has reached just about every corner of the British Isles. OK, you can still probably find bad fish and chips here and there but most towns have at least one terrific eatery of some sort these days.

I’m not referring to those uber-expensive, Michelin-starred, Gordon Ramsey-type establishments; I’m referring to the local places that can be found everywhere – bistros, country pubs, pizzerias, etc.

The first great dining experience I had was in Ladbroke Road, Notting Hill Gate at the Portobello Ristorante Pizzeria. It sounds rather ordinary but isn’t, with it’s pretty, secluded outdoor garden dining area and swift Italian service that’s warm and welcoming. It’s always packed, even on a Monday night and when I heard they had a pasta dish with shaved black truffles on the menu, I didn’t bother looking at the rest of the offerings, despite spying some glorious piles of food en route to other tables.

When the dish arrived there was clearly enough for two but being a truffle glutton I ate the lot, apologizing to no-one. I have very understanding friends. The aroma was the stuff that foodie dreams are made of and I don’t think I’ve ever tasted a better pasta dish, even in Italy. A simple combination of butter, cream, parmigiano reggiano, copious amounts of black truffle and black pepper served over perfect ‘al dente’ spaghetti – and this was just a local corner eatery.

Next stop was Henley Regatta on the river Thames via Marlow and when one of the racing days proved a bit damp for open boating and champagne-swilling even for a Brit, we lunched at the Marlow Bar & Grill, another local restaurant.

The first thing I noticed was the quality of the listed ingredients on the menu…not just any old smoked salmon but a pretty, towering salad made with kiln-smoked wild Scottish salmon, free range egg and asparagus – and an equally impressive mélange of Colston Bassett Stilton with pear, walnuts and a honey mustard dressing. The smoked haddock risotto topped with a trembling poached egg was deliciously unctuous. Everything was beautifully presented and the flavors were perfectly balanced. 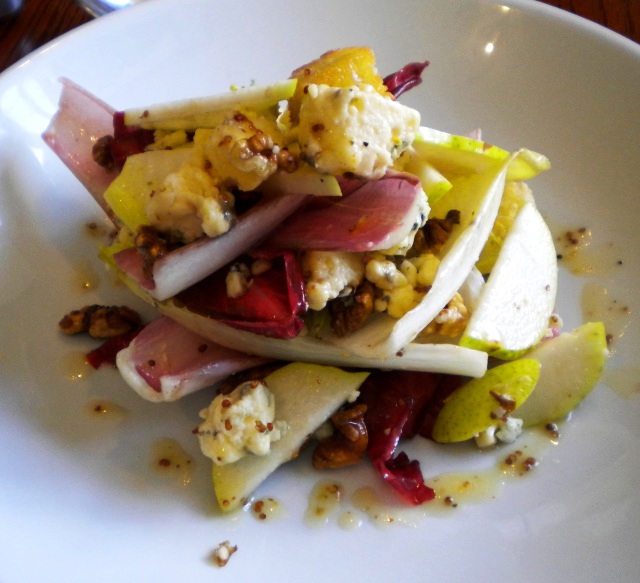 I was repeatedly reminded that British ingredients appear to have a better overall flavor than their American counterparts and beautiful edible oddities such as samphire grass or gooseberries aren’t available where I live in the US.

A trip to Cornwall confirmed this… tucked away in one of the old, narrow winding streets of Fowey is Sam’s, reknowned for it’s locally caught seafood.

Skate wings, gurnard, pollack and other such fishy wonders from that morning’s haul were on the menu; I wasn’t able to resist a vast bowl of steaming mussels that tasted so ocean-fresh, they must have been clinging to a rock at low tide that very morning. They were generously piled on top of the most fragrant, buttery, white wine broth imaginable and the generously-sized, hot, crusty baguette loaded with real butter that came with it, was the perfect mopping agent.

Now that I’m back home enjoying our wonderful Colorado climate, I can honestly say that however dire the British weather is (and let’s be honest, anyone going across the pond with hopes of doing some sunbathing is nuts), my UK dining experiences with good friends and family rendered the pervasive damp over there, completely irrelevant.

I’ve returned with some mouthwatering memories and along with the scenery, the greenery, the English coast (even in the fog when it’s atmospheric), there’s the undeniable fact that we can all drive a heck of a lot faster over there than over here.

I'm passionate about food; I cook, photograph, eat...then writes about it in that order. I'm also an occasional restaurant critic and caterer; a former newspaper columnist; author; social media/marketing communications; world traveler; dog lover; skier...and wit, (according to those who know me).
View all posts by edibletcetera →
This entry was posted in Food & Travel. Bookmark the permalink.