Here’s some sunshine in a jar for the first day of spring. 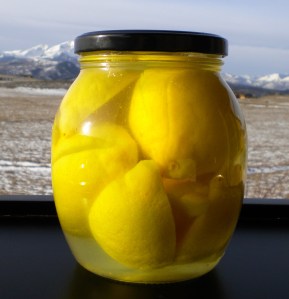 A jar of Moroccan preserved lemons makes a lovely gift and brightens up any kitchen. If you make them to give as gifts do the recipient a favor and give them a recipe to go with it. In the past I’ve given jars of preserved lemons to friends along with some recipe ideas without writing anything down; the lemons remained a mystery item that gradually darkened until they became sinister looking and despite verbal instructions, I suspect they were eventually thrown away.

On the basis that this only takes 5 minutes to prepare I’m going to include a recipe or two. If you’re into experimentation, preserved lemon is best used with chicken, lamb, pork or white fish such as halibut, swordfish and mahi-mahi. But hey – if you want to experiment with tenderloin of beef or calves’ liver, please let me know if the end result is worth sharing.

Preserved lemon is more of a condiment that anything else and you’ll need to eliminate or cut back on the amount of salt in any recipe you use them in.

Obviously, preserved lemon isn’t suitable for making desserts unless you like the idea of salty lemon meringue pie.

By the time they’re ready to use after 8-12 weeks, they’ll have taken on a darker, golden hue (see pic below) and once opened they must be kept in the fridge.

Notes at the end.

A quantity of smooth skinned, flawless lemons (Meyer lemons are ideal but not essential); enough to stuff your glass jar of choice.

Thoroughly clean the glass jar then put it in a warm oven while you prepare the lemons.

Gently rinse the lemons until they squeak and you’ve removed all the silly wax that supermarkets use to make fruit look shinier than nature intended.

From the pointy end, cut an ‘X’ in each lemon almost to the stalk end but not quite, so that they open up but stay attached. Sprinkle the cut insides with sea salt. I don’t measure this – a good sprinkle will do.

Pack them into your warm glass jar and push them down. Add a tablespoon of sea salt to the jar and slowly pour in boiling water until the lemons are covered. Push them down some more and if there are any large gaps, stuff salt-sprinkled lemon quarters in amongst the whole lemons to fill the jar. Cool and seal.

Set aside at room temp for 2-3 months or until they’ve taken on a golden hue – if you can remember this, give the jar a daily turn to swish the liquid about.

Once they’re ready you can use the entire lemon; skin, flesh, everything but the seeds. They’ll have taken on a softer consistency and the liquid can be used in dressings or sauces. Cut pieces out as you need them and mince finely or use in chunks such as for the chicken recipe below.

Here’s a recipe for Moroccan chicken with preserved lemons but first, a couple of other ways I like to use them:

It makes deliciously tangy coleslaw; dilute the mayonnaise with a small amount of the juice from the lemon jar then mix with your shredded cabbage etc., adding a teaspoon or so of finely minced preserved lemon and a sprinkle of caraway seeds to taste. No salt needed and you’ll use less mayo.

Finely mince some red onion and scatter on the bottom of a baking dish; put the skinned fish fillet on top and add a few pitted kalamata olives (rinsed). Sprinkle with a combination of finely chopped garlic, parsley and preserved lemon; add a good grind of black pepper and a very generous drizzle of extra-v olive oil over the fish. Cover tightly with a lid or foil and bake at 325F / 163C for 30 mins or until the fish is just falling apart but not dry.

Marinade some skewered shrimp with minced preserved lemon, jar juice, olive oil, black pepper and chopped fresh rosemary before throwing on the barbie. Or if you can get really good strong rosemary branches, just thread large shell-on shrimp straight onto the rosemary twigs for a really fabulous flavor.

Now for the very easy chicken dish – you can start this the day ahead:

For the marinade, whisk together the following:

Add this to the chicken in a Ziplok bag(s) or glass dish and cover – make sure the chicken breasts are well coated and marinade in the fridge preferably overnight or for 4 hours minimum.

1/3 cup of blanched, slivered almonds; dry toasted in a heavy skillet until golden and set aside

Remove the chicken from the marinade and reserve the marinade. Place the chicken and the preserved lemon wedges in a roasting pan then roast in the preheated oven for 20 minutes, or until cooked through and no longer pink in the middle – transfer to a serving plate; cover with foil to keep warm.

Wipe out the roasting pan with a paper towel to remove any fat – then working on the stove top, add the marinade and ½ cup of the chicken stock to the roasting pan – bring to a boil and stir for a few minutes until slightly thickened; set aside.

Heat the 2 tablespoons of olive oil in a large sauté pan over medium heat; add the onion and chili and sauté, stirring for 2-3 minutes or until very soft – add the remaining cup of stock and bring to a boil, turn off the heat then add the couscous; stir it well. Cover and set aside for 5 minutes or until all the liquid is absorbed. Once absorbed, fluff the couscous with a fork.

Add the reserved marinade from the roasting pan, almonds and currants or raisins to the couscous; stir gently over a low heat for 2 minutes or until all the liquid is absorbed. Turn off the heat.

To serve: thickly slice the chicken across the grain and arrange the slices on top of the couscous with the roasted preserved lemon wedges and a good scattering of chopped cilantro/coriander leaves.

There isn’t a picture of the final dish because I couldn’t find ten people at the last minute to eat it in time for this blog so I didn’t make it.

I don’t know if this recipe freezes or not but I do know that if you’re running out of space in your fridge and a large jar of preserved lemons takes up too much room, you can finely chop them all and freeze with a little of the juice in ice cube trays. I did this out of desperation, not wanting to throw any away – it works.

If you know me and can’t wait 3 months to make this dish, you only have to ask – you can have some of mine 🙂

I'm passionate about food; I cook, photograph, eat...then writes about it in that order. I'm also an occasional restaurant critic and caterer; a former newspaper columnist; author; social media/marketing communications; world traveler; dog lover; skier...and wit, (according to those who know me).
View all posts by edibletcetera →
This entry was posted in Sauces, Preserves, Condiments, Vegan. Bookmark the permalink.