Wandering around my local supermarket the other day I spied a bag of glorious little blood oranges and as they’re only in season occasionally, I had to grab them.

The fragrance and deep ruby color of their juice is absolutely wonderful in cocktails but I wanted to present them in a way that left no doubt as to what they were, so what better than to grill them?

Its also one of the quickest and easiest dessert you can make; messy yes – but in the best possible finger-licking way and the smell of sugar caramelizing with cinnamon and citrus will make you drool.

If you don’t like cinnamon, try using something else such as allspice or vanilla….cayenne pepper could also be interesting.

I like them just as they are but you can make a minty, honey yoghurt dressing for dipping or pouring. Just whisk together 2 tablespoons of clear honey, 2 tablespoons of chopped fresh mint and 9 oz (250g) of regular plain yoghurt.

The blood orange season is short so get them while you can. 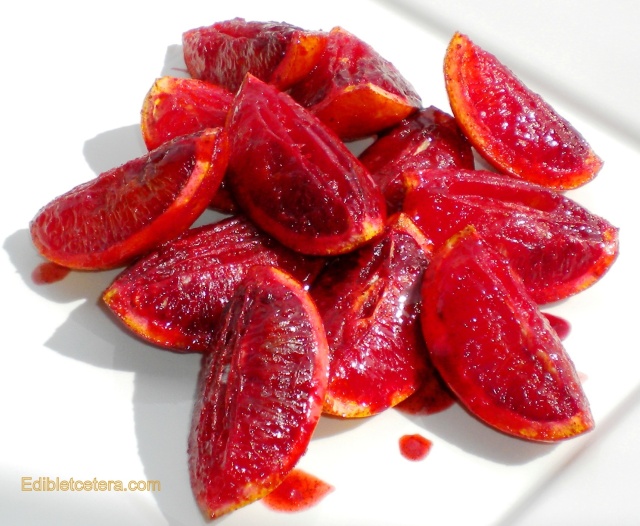 Heat your grill/broiler to its hottest setting.

Combine the juice of one blood orange with the icing/powdered sugar and cinnamon.

Quarter the remaining oranges and trim out the white pith that runs along the center of each wedge.

Dunk the cut sides of each segment in the juice/cinnamon/sugar mix and arrange skin side down on a grill pan.

Grill for 2-3 minutes then brush any remaining juice over the oranges and grill for another 2-3 minutes or until they’re bubbling and starting to caramelize. Watch like a hawk to prevent burning.

Let them cool slightly and eat with or without the mint dressing.

I'm passionate about food; I cook, photograph, eat...then writes about it in that order. I'm also an occasional restaurant critic and caterer; a former newspaper columnist; author; social media/marketing communications; world traveler; dog lover; skier...and wit, (according to those who know me).
View all posts by edibletcetera →
This entry was posted in Desserts, Gluten Free Desserts, Made in Under 30 mins, Vegan. Bookmark the permalink.